Nan, a classically trained professional musician, taught a five-year-old piano student who could play the first measure with fingerings but could not play the identical second measure without fingerings in his beginning method book. After six months of lessons, he was not learning to read music well. At this same point in time, he could play the original version of Fur Elise by ear after listening to the recording of it on his keyboard. Nan asked other piano teachers how they met the challenges of teaching the very young child. Several expressed dismay at attempting to meet the needs of this age group. One responded, “I wait until they are at least seven years old!” Since Nan’s musical career was launched with piano lessons at the age of four, Nan knew there had to be a better answer.

MNM promotes solid sight reading skills.  As soon as possible in their musical studies, students need to attain the ability to hear the note before it is played instead of after they have played it. This leads to the ability to sight-read fluently; it also promotes expressive playing.

A large majority of beginning students of all ages start their study of music by reading a note, playing it, and then hearing what they just played. At the opposite end of this spectrum is the goal that all excellent musicians must attain:  Hearing the written note in the head before playing it. In this rearranged sequence, the ear becomes trained enough so that once the note is read, it is heard internally, and then played and heard aurally. The sooner this ability develops, the higher the interest in continuing on with the study of music usually becomes. 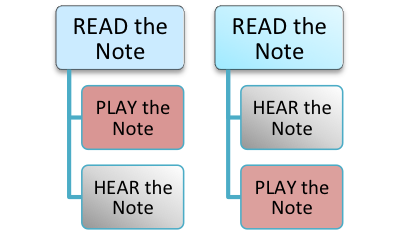 MNM addresses this crucial development towards solid musicianship by presenting the ability to read music in a visually stimulating way. The presentation of the clefs as representing specific notes (F, C and G), using color to ensure accuracy, and teaching scales and chords according to a formula of steps and half-steps all train the student to look and notice the details first, then figure out how to translate them into audible sounds. The switch to hearing a note before it is played needs to happen as soon as possible for a student to start feeling successful as a musician. By involving the student in the act of composing, this process is accelerated.

See how easy and fun this method can be!

Enter your email address below to get instant access to the FREE MerrieNan Melodies  Sample Songs book.

You will also be subscribed and eligible for other free goodies in the future!