A helpful teaching principle is to present an idea in its entirety, and then to break it down into the smallest piece possible to help the student understand the concept involved. MerrieNan Melodies does this in both the MNM EarlyStart books (for 4-6 or 7 year olds) and the MNM WriteStart books (for ages 7 and older).

The first thing noticeable about the MerrieNan Melodies program are the brightly-colored notes; children and adults alike are attracted to the materials immediately. These colors have a definite purpose. The MNM color-coded system assigns one color to each of the seven notes in the musical alphabet, A-B-C-D-E-F-G. An extension of this one-to-one correspondence is used in the MNM Music Note Code. The MNM Music Note Code translates each letter of the English alphabet and the ten numerals of the base ten system into one of the seven colors. This color-coded system starts with the note A instead of the note C in order to keep intact the order of the seven letters in the musical alphabet. The traditional “Every Good Boy Does Fine” and “FACE” approach separates the lines from the spaces, and takes the familiar order out of the alphabet. With the MNM approach, the student simply reads the notes with the aid of color until she recognizes the note names and no longer needs the colors. For the purpose of learning to read notes, the colors function as “training wheels,” like on a child’s first bicycle. 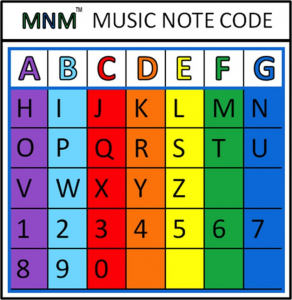 Looking at the code allows easy translation of all the letters of the entire alphabet and the numerals 1 through 9 plus 0. The MNM Music Note Code starts with 1 instead of 0 because children start counting with 1. Simply match up the letters of a name, word, or number with the seven note names in order to write a series of notes. An example of this procedure is found on the “Anna Song” page in both the MNM EarlyStart Musician’s Book and the MNM WriteStart Musician’s Book.

Learning to Read Music by Writing and Composing for All Beginners

One of the most important aspects of MerrieNan Melodies is learning to read music by writing and composing. This approach gives access to learning and playing music to all beginners including the youngest students. There is no longer the need to wait until the child is reading words in order to begin music lessons; all that is required is that the child knows the first seven letters of the alphabet and colors. The entire MerrieNan Melodies system is a composing kit as well as a unique method of learning how to read music.

Music educators recognize that the beginning piano student needs something simplified in order to learn note names. One of the pitfalls of the early stages of reading music is that the student learns to look at and depend upon the fingerings provided in most beginner methods. The new reader quickly learns to put his hands in the five finger hand position and reads the numbers in order to play the notes. Once the numbers disappear, he may no longer know which notes to play. Children are constantly trying to make sense of new learning and it is no surprise when many believe that music reading involves watching those finger numbers when they should be paying attention to the location of the notes on the staff.

MerrieNan Melodies uses printed fingerings in a limited and purposeful way. Instead of the usual printed fingerings, little hands with the color-coded notes on each finger guide the beginner in establishing a workable hand position. After the student has learned the note names, the printed fingerings found in most other piano methods no longer detract from learning to read the notes.

A special attribute of the MerrieNan Melodies approach at the beginning levels is the use of the same notes in both the treble and bass clefs in the songs that students play. There are advantages to this “double note” approach.